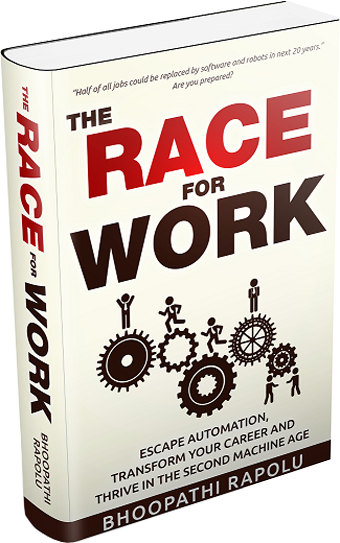 The Race for work

THE #1 BESTSELLER ON AMAZON IN CAREERS AND JOB HUNTING

Available in eBook, Print and Audiobook.

For the lucky, access to healthcare is a given – it’s there when we need it, just as any basic human requirement should be. The provision of healthcare, however, is still not universal and a global healthcare model that is truly democratic – where everyone has access to affordable quality health services – is yet to emerge. According to a WHO and World Bank Group report, 400 million people still go without access to essential healthcare.

Yet, over the course of the next decade, I believe we will see the democratisation of healthcare, a transition that will be driven by continued consumerisation, data sharing and, most notably, the growth of disruptive technologies. In fact, we are currently witnessing the most exhilarating era of healthcare development. Much like we saw in the telecommunications industry in early 1990s, where at first connectivity and calls were restricted to those able and willing to pay the premium, healthcare is the next candidate in line to experience this revolution and open up to all.

But what will the utopian future look like? Here, I explore the concept of democratised healthcare and the key technologies and systems that will empower this movement.

The fall of the old regime

It is undeniable that global healthcare is ripe for change. We’ve already touched on the inequality that exists, but there are numerous other threats to achieving democratised healthcare. Most notably, populations are living for longer, which brings a number of complex challenges for healthcare systems striving to deliver adequate services for all. Firstly, when originally conceived, most health systems were structured to tackle diseases rather than manage long-term conditions such as dementia, cancer or Chronic Obstructive Pulmonary Disease (COPD). Secondly, managing the intricacies associated with longer life not only impacts on physicians’ ability to care for patients, but they also add significant operational and financial strain to healthcare organisations. The NHS is one such system that is succumbing to this mounting pressure.

To disrupt the status quo and evolve the provision of health globally, we must transform the practice of medicine and personal healthcare from reactive disease detection to a position of proactive prevention, which is enabled through self-monitoring and early diagnosis. It is here where I believe that technology can facilitate this change – levelling out the playing field through the development of products and interactive systems that shift the focus towards early identification and disease prevention, and that give people and doctors the information they need to manage their health more effectively.

The transfer of power: technologies driving this revolution

So, which technologies are set to have the biggest impact? Given the complexities associated with an ageing population, those that help individuals understand how their lifestyle choices affect their wellbeing will be integral in making democratised healthcare a reality.

The consumerisation of healthcare is beginning to take hold through the introduction of smart, wearable devices that give people more control of their health in terms of diagnostics and care. However, the prevalence of affordable next-generation wearables combined with the proliferation of the Internet of Things (IoT) will push things to a new level for consumers and physicians. The data generated by sensors on such devices has huge potential. Doctors will be able to detect health issues earlier – or even before they arise – from a patient’s vital health statistics, as well as track the effectiveness of treatments of chronic illnesses remotely. Personalised profiles of patients based on their data will also become the norm, and they will be able to be treated through internet-enabled services without visiting a doctor. Greater connectivity in particular promises to revolutionise treatment for the vulnerable and those living in remote rural communities far from established healthcare services.

Such close monitoring will improve global health on the whole and alleviate the cost of care, allowing for investment to be redirected into revolutionary medical advances. One area of real interest, related to the IoT, is the progress being made by the use of Artificial Intelligence in medicine (AI), with the IBM Watson AI super-computer leading the charge. Recently, Watson saved a women’s life by diagnosing a rare form of leukaemia. After the case had baffled doctors in Japan for months, Watson was able to ‘solve’ it, identifying the disease in 10 minutes by cross-referencing generic changes with 20 million cancer research papers. Similarly, Moorfields Eye Hospital in London will be using one million anonymised eye scans to train DeepMind, an AI system from Google, to spot signs of diseases such as macular degeneration and diabetes-related sight loss.

By extracting data and digitalising human health to the maximum extent using these technologies, patients in the future may not even need to tell their physician about their condition or the pain they are experiencing. Data will be able to inform an AI algorithm about a patient’s condition, and AI will advise on which treatment the doctor needs to prescribe. Soon we’ll have an army of intelligent machines hard at work pulling, parsing and delivering data to physicians worldwide to support their decision-making. Greater access to services such as this use of artificial intelligence in medicine will make an awe-inspiring difference to the way that high- quality healthcare is delivered to the masses.

Establishing a new order with data

However, before democratisation becomes a reality, a number of challenges will have to be overcome. Most notably digitalising medical records and the knowledge we currently have, and then delivering insights from them in a way that is recognisable by all.

The healthcare market must also evolve. In the biggest cultural shift, healthcare providers will no longer be the guardians of patient data. With super-computers like Watson already in place, it won’t be long until other players are able to replicate it and provide similar capabilities in an open- source environment. Such an important algorithm for healthcare is very much required for society, and I envisage a Google-type service for the sector coming to the fore sometime soon. In essence, it would be a free software platform powered by open-source human health data, which would include information from machines and best-practice diagnostic techniques from across the world.

Just as the mobile revolution democratised communication among people, healthcare will be democratised through the rapid digitalisation of personal health and growing Artificial Intelligence to aid doctors. Fundamentally, this will change the way that healthcare is delivered, and the relationship between patients and physicians as we know it. Viva la revolution!

GET THE FREE WORKBOOK TO FIND YOUR DREAM JOB 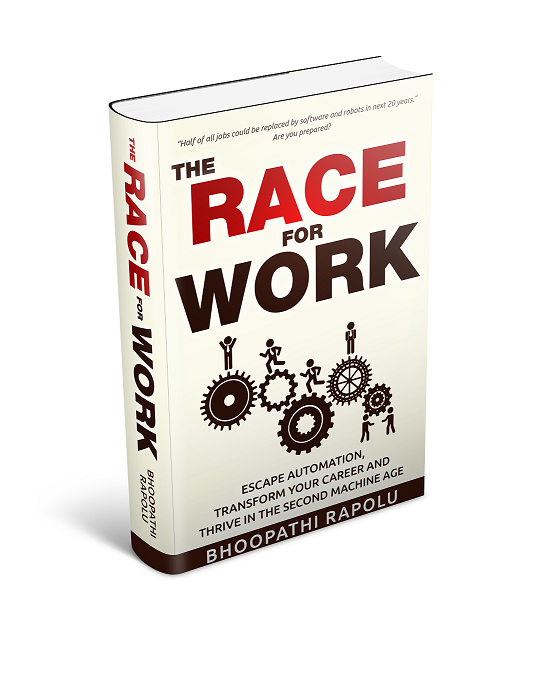 A 90 Day Goal Setting Template to implement the core principles of The Race for Work.

Just let me know where to send it.

Available in ebook, print and audiobook

Get your copy today